In april this year it was 90 years ago, that Walter Gropius founded the Bauhaus movement.  Although the movement is best known for it’s idea’s on architecture and interior design, from 1921 until 1929 there was also a stage department at the Bauhaus. The best known performance of this department is the “Triadic ballet”, a dancepiece by Oskar Schlemmer with geometric stylized costumes. 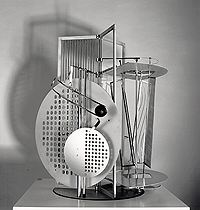 At another department of Bauhaus LÃ slÃ² Moholy-Nagy worked on a light-space modulator.  It was a kinetic sculpture, composed of color, light and movement, which can be seen as a synthesis of his artistic ideas, a Gesammtkunstwerk. Moholy-Nagy himself described this as an “apparatus for the demonstration of the effects of light and movement”. In 1930, the “light-requisite for an electrical stage”, as it was also described, was exhibited at the show of the German Werkbund in Paris.

One could only guess what would have been the outcome of a combination of this light-requisite and the stagework of Schlemmer.

In 1930 Moholy-Nagy captured his Light-space modulator in the film “Black, white, grey”.