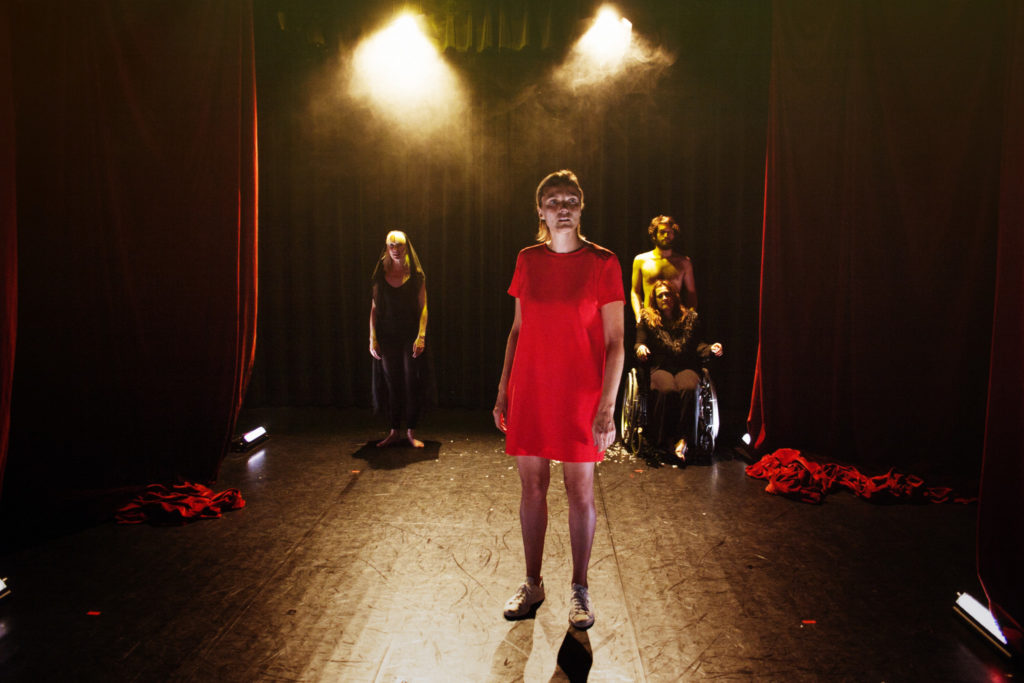 Black Hood is a radical adaption of the story of Little Red Ridinghood about a young female in search for herself in a world full of floating boats, Tinder, Botox, Black Face and sex with robots. Little Red Ridinghood is faced with both bizarre and recognizable choices in life. A Killerbody or Living the Moment? Botox or a baby? Helping refugees or Festival Hopping? And if all is possible, but you don’t seize the opportunity, are you a loser?

Theater company Black Hood consists of four young dramatists: Vincent Bendervoet, Mireille Ettema, Annefleur Klinkhamer and Sanne Krijgsman. In 2017 they finish their education at Theaterschool de Trap. They want to perform in Dutch theaters with personal and contemporary theater shows with an edge. Their extra talents in the fields of dance, scenography, stagecraft and voice acting make them very complete artists. Their first show Black Hood is nominated for the Amsterdam Fringe Festival (1-11 September 2016).

Mike Evers created light design and scenic image in collaboration with Mireille Ettema for Black Hood. With use of red masking, LED lighting fixtures on the floor and the use of a hazer a scenic image was designed that matches the content of the performance. The show was performed four times in the Polanentheater in the West of Amsterdam during Amsterdam Fringe Festival.

More information about the show and its makers can be found on the website of Amsterdam Fringe Festival.